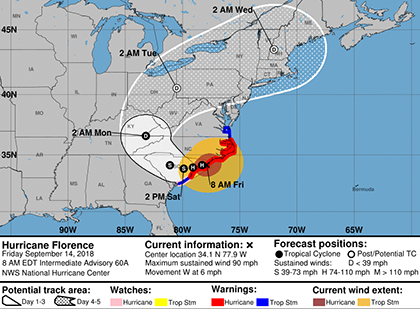 Hurricane Florence has made landfall in North Carolina, but its crawling pace and overwhelming storm surges are setting up hours and hours of destruction and human suffering — with dozens desperately awaiting rescue in one flooded city alone.

The hurricane, with wind of more than 90 mph and 3 inches of rain an hour, made landfall at 7:15 a.m. ET near Wrightsville Beach, just east of Wilmington, North Carolina.

Florence’s center may linger for another entire day along coastal North and South Carolina — punishing homes with wind and floods and endangering those who’ve stayed behind.

In the North Carolina city of New Bern, by 9am ET Friday rescuers had plucked more than 200 people from rising waters, with about 150 waiting as conditions worsened and a storm surge reached 10 feet.

“In a matter of seconds, my house was flooded up to the waist, and now it is to the chest,” said Peggy Perry, who along with three relatives, was trapped early Friday in her New Bern home. “We are stuck in the attic.”

Officials urged residents there to take shelter at the highest points of their homes, including rooftops.
Florence’s rain will reach 40 inches in some parts of the Carolinas, and gusty winds will send the ocean and rivers spilling into neighborhoods, forecasters said.