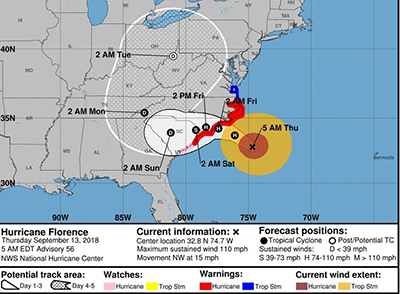 As Hurricane Florence closes in on the Southeast, the area covered by hurricane-force winds has doubled — meaning far more people will be assaulted with winds 74 mph or greater.

By late Thursday afternoon, the Carolina coasts can expect winds topping 80 mph. And that’s just the beginning of untold days of misery.

“Catastrophic effects will be felt outside the center of the storm due to storm surge as high as 9 to 13 feet. That’s the second story of a house,” North Carolina Governor Roy Cooper said Thursday morning. “Tens of thousands of structures are expected to be flooded, and many more by rising rivers and creeks.”

Don’t be fooled by the fact that Florence has weakened slightly to a strong Category 2 hurricane. Categories only represent the speed of sustained winds, and these are still destructive.

“I don’t care if this goes down to a Category 1,” CNN meteorologist Chad Myers said. “We’re still going to have a Category 4 storm surge.”

Even worse: Florence is expected to hover over the Carolinas, whipping hurricane-force winds and dumping relentless rain at least through Saturday.

And now, many more people, houses and buildings are set to endure hurricane-force winds, which reach 80 miles out from Florence’s center.

“It’s cumulative damage,” Myers said. When fierce winds keep up for a long time, homes are “going to start to deteriorate. So will the trees. So will the power lines, as the trees fall down.”