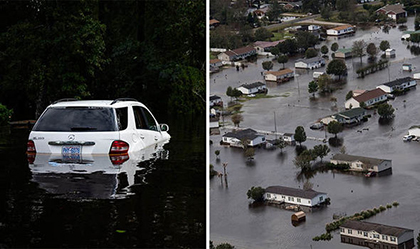 • At least 32 people have died in storm-related incidents — 25 in North Carolina, 6 in South Carolina, and 1 in Virginia.

• About 500,000 homes and businesses are still without power, mostly in North Carolina and some in South Carolina.

• As of 5 a.m. Tuesday, Florence was a post-tropical cyclone. It was located about 105 miles west-northwest of New York City with maximum sustained winds of 25 mph, the National Hurricane Center (NHC) says.

• “The remnants of Florence are expected to produce heavy to potentially excessive rainfall through Tuesday,” NHC says. “Portions of the northern mid-Atlantic states northeast through southern New England are expected to receive an additional 1 to 2 inches of rain, with isolated maximum amounts of 4 inches possible.”

• The Cape Fear River is set to crest at 62 feet Tuesday.