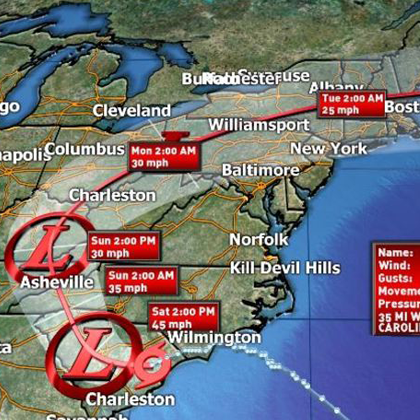 Florence continues to wreak destruction long after the worst of the storm has dissipated, with major flooding continuing to blast many areas of North and South Carolina.

Several large rivers and creeks have broken their banks, threatening homes with further damage after the tropical depression Florence, once a major hurricane, made landfall in North Carolina on Friday.

She said: “The good news is that the Lumber River is receding, but it’s still running at 22 ft, that is well above flood stage by 13ft. It’s still running at record flood stage, the record previously was 21.8 ft. It’s not the only river of concern though, as the Cape Fear River — for Fayetteville especially that’s a massive concern — is already running at 58.9 ft.”

CNBC has estimated that damage from Hurricane Florence could total to over $22 billion, but the exact figure was uncertain “until the flooding is over.”

Florence has dumped up to 36 inches (91cm) of rain on the state since Thursday and the storm has already killed at least 23 people.

Days before the powerful storm reached the US East Coast officials issued mandatory evacuation orders for more than one million people.

Some residents chose to stay behind when the storm crashed into the Carolinas.

So far 23 deaths have been confirmed, six in South Carolina and 17 in North Carolina.

In Fayetteville, home to approximately 210,000, authorities told thousands of residents near the Cape Fear River and Little River to get out of their homes by Sunday afternoon because of the flood risk.

Mitch Colvin, Mayor of Fayetteville, North Carolina said: “If you are refusing to leave during this mandatory evacuation, you need to do things like notifying your legal next of kin because the loss of life is very, very possible. The worst is yet to come.”

Florence has continued to produce widespread heavy rains over much of North Carolina and northeastern South Carolina.

More than 641,000 (now down to an estimated ~500,000) homes and businesses were without electricity in North and South Carolina and surrounding states, down from a peak of nearly one million.